29
SHARES
294
VIEWS
Share on FacebookShare on TwitterShare on Whatsapp

Nigeria’s Billionaire businessman and politician, Ned Nwoko has reiterated his commitment to eradicating malaria as he has positioned his foundation towards working to achieve this enormous task.

The honorable Minister, Lai Mohamed said he was elated by the visit as the “Eradicate Malaria” project was a noble idea that supports humanity. He further thanked the prince for the initiative and for his continuous love and consideration for Nigeria and Africa at large.

He assured Prince Nwoko of the Ministery’s willingness and commitment in supporting a patriotic initiative that enhances the well-being of Nigerians, as such he will readily be available to assist the project when being called upon.

You will recall that Nwoko had recently flagged off a malaria program to overcome the recurring tragedy of hundreds of thousands of avoidable health complications and deaths as a result of the deadly disease.

He said the Prince Ned Nwoko Foundation was committed to rendering support and services to the needy, the society and humanity at large.

Nwoko noted that in the course of his numerous interventions, he discovered that the malaria scourge constitutes one of the greatest impediments to the general wellbeing and development of Africans and their societies. 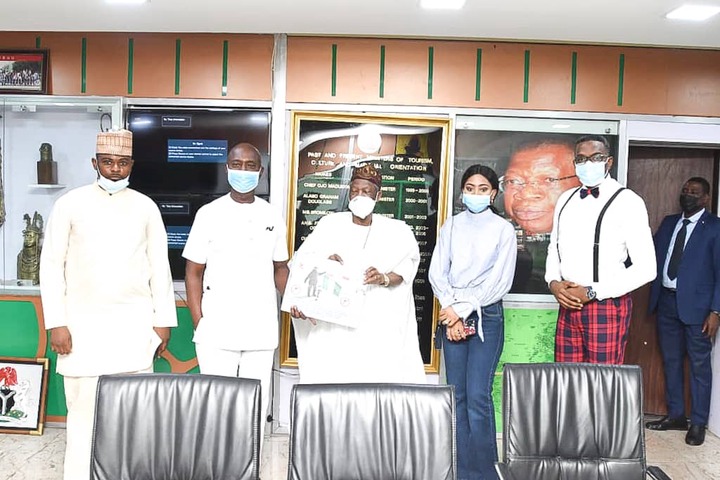 According to him, ‘’Most health challenges suffered by Africans including death, organ damage and other physical and mental impairments are directly or indirectly traceable to malaria.

“My Foundation has begun an audacious journey towards a malaria-free Nigeria and Africa. In this project, we will work with national and multilateral organizations.

‘’We will equally collaborate with governments, private organizations and civil society towards achieving our core objective of extending malaria intervention programs beyond the threshold of control and palliatives. We have our eyes fixed on a permanent solution to the age-long scourge.’’

Prince Ned Nwoko said he had good deliberations with the Hon. Minister of Information and Culture, Lai Mohammed on ways of collaborating with his Ministry for the Malaria Project.

He said our areas of focus are Research for safe Malaria Vaccine, Sanitation and Cleaning of the entire environment, Waste Management and Establishment of recycling plants in every local government and finally total fumigation of the length and breadth of the country.

Prince Ned Nwoko stated that everyone is a stakeholder in the Malaria Project as such all hands must be on deck to end Malaria in Nigeria and Africa.

’Malaria does not only cause loss of life but also interferes with athleticism, socio-economical activities and general way of life of the people over a sustained period,’’ he said.

Nwoko explained that the inclination to empathize, assist and care for vulnerable Nigerians made him to embark on the mosquito elimination and malaria eradication program.

The President of the Court of Appeal, Justice Monica Dongban-Mensem has assured Nigerians that she is determined to ensure that...

FOOD INSECURITY DURING THE COVID-19 PANDEMIC